When intended parents need to find a surrogate in Australia, they most often do so through informal family and friendship networks.   In a recent study[1] of the socio-demographic and psychological characteristics of a large sample of 160 surrogacy arrangements over a 15-year period to 2018, the connection between intended parents and  surrogate was primarily close family (sisters or sisters-in-law or mothers) (48.6%) or other extended family or friends (46.3%), with the remaining small percentage meeting through online surrogacy forums (5.1%).

It is not permitted by legislation in Australia for there to be commercial brokerage of surrogacy relationships. There are however consumer non-profit organisations such as “Rainbow Families (www.rainbowfamilies.com.au), and “Gay Dads Australia” (www.gaydadsaustralia.com)  which are helpful for people wanting to find out about surrogacy. And another, “Surrogacy Australia” (www.surrogacyaustralia.org), also actively facilitates the meeting of potential surrogates with intended parents.  Note however, that there is a reportedly a significantly lower number of potential surrogates than intended parents who are looking for surrogates, so it is best not to rely on this method.

Hence, intended parents need to think about finding their surrogate through their own family and friendship networks. This fortunately is not as difficult as often thought, though it may appear to be daunting at the beginning of the surrogacy journey.   Experience shows that finding an altruistic surrogacy through networks requires intended parents to calmly, quietly, without emotion or a sense of desperate need, tell everyone that they know that surrogacy is the only way that they can have a baby.  As one intended father said “It is not like you are asking someone for a cup of coffee” and it definitely is not.  To help, there is a particularly good brochure available from the Victorian Assisted Reproductive Technology Authority (VARTA). (https://www.varta.org.au/resources/brochure/finding-surrogate)

There is an oft expressed belief that if intended parents do not have a sister or sister-in-law who can help then they need to go overseas. Whilst this was not uncommon at the beginning of the 20-year period shown in the graph below, as time has gone by, it can be seen that there is a definite increase in the number of friends acting as surrogates.  This may be connected to greater knowledge of the need for help through increased information about surrogacy arrangements in the wider Australian community. 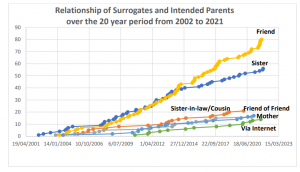 Experience in Australia over more than 25 years of altruistic surrogacy, shows that there are women who are interested in and prepared to be an altruistic surrogate without financial gain.  But it is not all or even most women.  An unpublished study of 120 surrogates found that the values that led women to offer to be a surrogate included: a belief that surrogacy is “special”; sadness if they would themselves have been unable to have a child; empathy with people who are unable to be mothers or fathers naturally; good experience of pregnancy and childbirth; and a desire to have an ongoing relationship with intended parents. There is a sense of achievement for a woman in being able to help this way, and as one surrogate partner said “A friend of our eldest child said, you must be so proud of your Mum.”  Though feared by intended parents, there was never a concern expressed of not being able to relinquish a child, though there was an interest in the future of the children.

Surrogates report that when they tell other women what they are planning to,  the response is often “That’s amazing, I couldn’t do it.”  Thus, this isn’t something that an intended parent can ask directly of any woman.  What needs to be done is for intended parents to put their particular reproductive situation out there in their wider world, and wait for an offer.   To do this can be very challenging, particularly if there have been intense challenges, such as that experienced by an intended mother connected to reproductive losses, or congenital abnormality, or following cancer diagnosis or treatment, or diagnosis of a condition which prohibits pregnancy.

Understandably it can be really emotionally difficult to cope with such challenges, but as one intended mother said, “I used to lock myself away, but I was isolating myself and I lost friends. That wasn’t going to work, so I pulled myself out of that hole, and I took a different approach.  Now I often see my friends with children.” To help, it is recommended that intended parents undertake supportive therapeutic counselling to help manage the intensity of their emotional pain while they are telling people of their need and waiting. Often when intended parents do take their time, prepare as much as they can, and look after themselves emotionally they find that there will be someone who will offer to help them out. As an intended mother put it, “It’s a very generous thing for her to do. We feel really lucky.  I understand how generous she and her partner are, and how fortunate we are.”

Same sex men who are thinking of surrogacy may also find it helpful to undertake some counselling as part of planning how they can best help their surrogate with pregnancy related issues and also prepare them for discussions with their child and the wider community about the conception and birth.  And in the words of an intended father “We’ve been very touched by her offer to be our surrogate, we find it hard to comprehend that she can be so giving, so nice.  We feel so comfortable with her.”

An example of how intended parents and surrogates find each other.  A woman and her family were on holiday visiting another city in Australia and went to a barbecue organised by a friend.  There, during conversation, there was discussion of a young extended family member who had a cervical cancer diagnosis just as she had just been planning to start a family.  Her world had changed and she and her partner would need a surrogate to have a baby. The visiting woman thought to herself and then said to the family member, “I have always wanted to be a surrogate”.  And from this casual meeting a relationship developed that resulted in a child being born through surrogacy, which connected two families who had previously not been directly connected.

When a woman does mention an interest in possibly acting as a surrogate mother there is also a need for time and space during which she has time to do some research, think, and discuss with intimate partner and family. Definitely no pressure or hurry should be part of this thinking and discussion because it could be counter-productive. No one likes to be pressured, particularly in something as significant as carrying a child with the deliberate intention to relinquish after birth.  Women who act as a surrogate mother often say that they find personal meaning in the surrogacy. Thus, one surrogate said “I thought there is a lot of things I can’t do in my life, but I can do this. I have two children and I am so blessed, and I can’t imagine not having kids, it just doesn’t seem fair.”

In the meantime, while waiting and hoping for a woman to offer her help,  intended parents can proceed with obtaining and storing their embryos, and get on with their normal work and family lives.  One benefit is that it gives intended parents time to save money, as even though surrogacy is altruistic and not commercial, the costs in Australia are still quite significant. However, the time, waiting and preparatory medical, counselling and legal consultations for altruistic surrogacy in Australia are definitely worth it.

Though it may seem a longer, slower option than going overseas, there are many advantages, not the least of which is that it is legal and there are not the logistical difficulties involved with an overseas arrangement.  My extensive experience in surrogacy counselling over more than 25 years shows that we do surrogacy very well in Australia.  I have met many wonderful people who have together created children who grow up knowing everyone who contributed to their genetic and birth story.  A surrogate said “The child will be like a niece or nephew and will be part of my life. They can meet me and won’t feel abandoned by me.  This is going to be a real village that brings this child into the world.”

Note:  The comments in this article have been said to me by parties to altruistic arrangements during independent pre-surrogacy counselling.  These people kindly gave me permission to use non-identifying information about them and their surrogacy and I do so with respect.